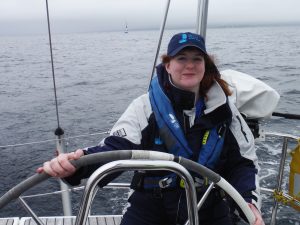 Without hospital coordinators, many young people would miss out on support during their recovery, and that includes knowing about the Ellen MacArthur Cancer Trust.

And having been on trips herself for three years now, Nicola is best-placed to see the impact they have on young people over a period of time.

“There’s one young guy in particular, he didn’t even particularly engage with the service we have here beforehand," she reflects. "We managed to convince him to go on the trip. He was stuck in a job he didn’t enjoy, he was not particularly happy, he was worried about his future because of his health.

“He met other young people on the trip, one in particular he has a really good relationship with, they still keep in touch now even though they’re from different parts of the country.

“He’s just a totally different person after the trip. He got a new job, went back to university, and he’s one of the most involved in my service now because he’s just totally come out of his shell. He’s more comfortable in that group environment.”

The Teenage Cancer Trust arrange activities like pizza days, theatre trips, and bowling, all of which he is now involved in helping out with. Nicola also hopes he will go on to become a volunteer with the Trust.

Nicola works with her team to identify who they think could benefit from a trip.

“We call people who are in a good place with their health and who are going to be eligible for the trip,” she explains. "We send them a letter, sit and do the paperwork with them, and then we talk through what the trip is.” Young people are then invited to an information session where the Trust comes to the hospital, giving them the chance to ask any questions.

Peer support is at the heart of what Nicola sees helping young people with their recovery. She relates the experience she has running a monthly group at the Maggie's Centre in Fife to the environment of being on a boat on Trust trips.

"We’ve spoken about what we want from that space and time at Maggie's," she continues. "It’s their group and they never want to talk about cancer. They’ll sit and talk about what they’ve been binge watching on Netflix or what’s been going on in school. It’s not all about cancer.

"On trips, it could be the actual skills young people learn during it, it could be a new hobby. We’ve had a lad who went on to do his Day Skipper because of the skills he learned on the trip and loved it, going on to do his qualifications.”

Balancing that focus on learning with the opportunity to talk about cancer makes for a safe space. On Nicola’s trip this year, her crew created a charter which had a safe word, so that if a conversation about cancer was making someone uncomfortable, they said a word and the conversation would stop.

As someone who sees the long-term recovery of young people going through cancer, Nicola says "everybody should go on a trip if they're given the opportunity."