What a hit - sun sets on another magical summer

It's been another magical summer at the Ellen MacArthur Cancer Trust, with no fewer than 647 young people making memories and friendships that will last a lifetime.

Since the start of June,  trips have been running back to back to ensure as many young people as possible can be supported during their recovery.

Between the Isle of Wight and Largs, 16 first time trips welcomed 251 new faces to the Trust. Come rain or shine (mostly the former in Scotland!), these four-day voyages acted as an introduction to sailing. Each week featured impressive feasts too - the elements were no match for determined barbecuers and the baking contests were of a high standard!

Thirteen trips have also so far seen another 370 young people return to the Trust, taking part in longer sailing trips in the Solent or from Largs, and residentials at four UK-wide outdoor adventure centres.

Meanwhile, activities at Essex Outdoors Bradwell, Outdoor Adventure in Cornwall, Water Park Lakeland  Adventure Centre in the Lake District and the Hollowford Centre in the Peak District kept everyone moving! From high ropes and climbing to caving and kayaking, everyone had a fantastic time. 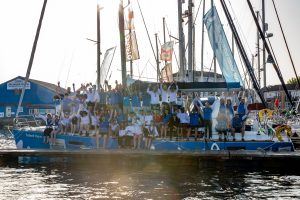 June saw 26 young people join one of the largest yacht races in the world around the Isle of Wight. The Trust has been the official charity of the Round the Island Race since 2007. This year, the young people were joined by record-breaking sailor, Brian Thompson, who has sailed around the world four times, and holds the record for fastest lap of the island.

And in August,  14 siblings of young people who have previously sailed with the Trust had their own residential trip to Water Park too, after last year's successful pilot. A cancer diagnosis changes a family and it is super important siblings, who also experience anxiety and loneliness, receive support too.

And there are still two canal trips and the ASTO Small Ships Race to go!

Now we get ready to do it all again next year