From visiting hospitals in January through to the Radio 4 Appeal in December, helping young people rebuild their confidence after cancer is at the heart of everything we do. Trips took place both on and off land all across the UK, while young people and volunteers attended some of the country’s biggest festivals to share their experiences with the Trust. In short: it was jam-packed.

This year’s season saw 649 young people attend a confidence building Trust trip, either on the water or at one of our partnered residential centres. There were 16 first time trips that sailed from Cowes and Largs, on which we were joined by 251 young people.

Following a successful siblings trip pilot in 2018, 14 brothers and sisters of young people who have been supported by the Trust joined our second siblings trip at Water Park in June.Two canal trips ran in Essex, one more than last year, providing a higher level of support for young people with more severe mobility issues.

Our volunteer pool increased, with 20 people who had previously been supported by the Trust returning to train as volunteers, going on to inspire other young people in earlier stages of recovery.

It is so important young people in recovery feel supported even after their treatment ends. Spending a few days sailing with others who have been through something similar leads to strong and immediate bonds, and it may be the first time they have ever met someone who understands what they have been through.

It’s for this reason that 98% of young people on first time trips enjoyed their trip and said they felt more confident, and that they had learned new skills. That difference is felt among their families as well, with 95% of parents and guardians believing their child would return for future trips. An increase in confidence was noticed by 96% of parents too.

Almost three quarters of the young people on our siblings trip said they had never been in contact with other siblings in recovery from cancer before. Everyone had a positive experience, and we continue to learn more and more about why support for siblings is essential.

Back in March, over £49,000 was raised at a fundraising event hosted in the iconic BT Tower. Dame Ellen MacArthur took part in a Q&A with Krissie Cartwright-Riley, who sailed with the Trust as a young person and returned to become a volunteer. She shared her story throughout the day, telling guests: “The Trust made me feel 'normal' again, it made me get rid of the feeling that cancer makes you the odd one out. Through the Trust I want to prove to other young people that cancer isn't the end of their world.” With a raffle, a donor lunch, a black-tie dinner gala, and an auction, the day was instrumental in helping more young people regain their confidence after cancer. So too were all of those who donated auction prizes, and BT who kindly covered all the costs of the entire day. 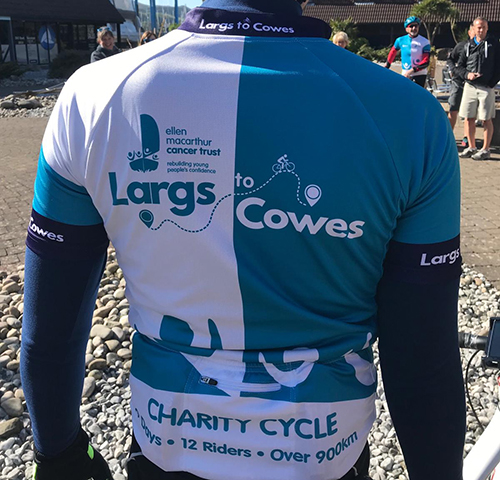 The BT Tower event was an opportunity for the cyclists taking part in the Trust’s Largs to Cowes Charity Cycle to get together and share training tips and advice. Across nine days in May, a core team of eleven riders travelled an incredible 1,014km between the Trust’s base in Scotland and our headquarters on the Isle of Wight, completely smashing their fundraising target of £30,000. One of the core crew was Mark Stevens who was supported by the Trust while recovering from leukaemia, and has since gone on to become a volunteer and join the board of Trustees. Of the cycle, he said: “I have seen first-hand the difference the Trust makes to young peoples’ lives, and the confidence it gives them, and I want to give that opportunity to more young people who are suffering from cancer. The Trust massively enhanced my confidence to push myself physically which is why I was determined to take on this challenge."

This summer saw the Trust set up camp at Carfest North and South, the Chris Evans-curated family festival celebrating music, cars, and charities from across the UK. The stars of the show were Sophie, who returned to sail with the Trust in Largs this year, and skipper Dan, both of whom shared their stories of recovery. Joining Sophie in the festival’s rock choir was Gruff, who sailed with Sophie on his return trip. He and Dan, along with fellow young person Jacob, later collected the funds raised for the Trust when Chris announced the final totals on air – almost a quarter of a million pounds was donated to the Trust which will help change so many lives for the better.

We also partnered with Trust Ambassador Rob Da Bank’s Camp Bestival. The Heroes vs Superheroes theme gave us an opportunity to talk about our everyday heroes and their stories. We met so many people over the weekend, all of whom were keen to hear about the Trust, including Lewis Capaldi, 2019’s biggest music sensation, who was more than happy to lend his support.

Rounding off the year, the Trust was delighted to be chosen as BBC Radio 4's Appeal for the Christmas week. Dame Ellen MacArthur shared Dervla's story with listeners, which you can read all about in Dervla's words here. It was a fantastic way to draw 2019 to a close, which will have a massive impact on the lives of young people who are rebuilding their lives after cancer. A huge thank you to everyone who tuned in and donated.