London and Leeds Groups on the Water this week 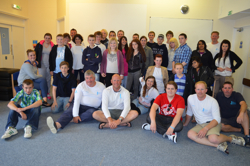 Nineteen young people travelled to the IOW on Monday to begin their sailing trip with the Trust following treatment at UCLH, The Royal Marsden, St James, Leeds and Great Ormond Street Hospitals.

Unfortunately as everyone arrived on the IOW the rain began to fall, so after the usual welcome and lunch, the group was split into crews for some adapted teambuilding tasks indoors, a first for this year!  Following this, everyone went down to their boats to unpack and settle in.

Dinner on the first night was pasta, which everyone helped to get to the table.  Gary from Plaza Ice Cream made his weekly visit to UKSA so everyone could have ice cream for pudding, and after that most of the group went up to UKSA’s pool for a splash-about.

Tuesday was the first opportunity to get out on the water, and after a good breakfast the five boats, Moonspray, Scarlet Oyster, Outreach, Sunsail 1 and Sunsail 2 left the pontoons at UKSA and headed down to Yarmouth.  After a day of sailing, the afternoon was spent enjoying cakes and tea courtesy of the Royal Solent Yacht Club in Yarmouth followed by fish and chips, some hybrid games based on football, rugby and cricket and attempted kite flying.  Once back on the boats the card games came out until bedtime.

On Wednesday morning the group visited Yarmouth Lifeboat, and also had a quick look around Yarmouth before their second day of sailing.  With a distinct lack of wind most of the boats put on their motor to head up to Newtown Creek although we have had reports of Scarlet Oyster with all sails up lagging far behind the rest but determined to sail up!  The boats have had Mackerel lines out today, and Sunsail 1 have caught a fish already, which will be prepared for the BBQ tonight.

Sav, 16, from Surrey and treated at the Royal Marsden said, “It’s been a Phenominominominominal sailing trip!!! We’ve done games with the rest of the group, and been sailing of course, that’s why we’re here, and saw the Needles.&nbsp" Yesterday was a bit sunnier but its been raining a bit today.  I’ve steered the boat, which was a bit of a bumpy ride with my steering!  We had a water fight with one of the other boats and we aimed pretty well! We’ve made loads of cups of tea, and done some cooking, today we had a tea party on the boat whilst we were sailing. It’s been brilliant!”

Sarah, 15, from London and treated at Great Ormond Street added, “I’m really enjoying it, the sailing of course and also playing games when we’re on shore.  We’ve played a lot of Uno which is my favourite.  I’ve been steering the boat, which was a bit confusing working out where it was going, but in the end my arm got tired so I gave it to someone else.  Now we are heading for Newtown Creek.”

We were speaking to Alex, 16 from Kent and treated at the Royal Marsden when Sunsail 1 caught the Mackerel – here’s what she had to say, “Its brilliant, its been really good. I’d never been on a boat before apart from a ferry and proper sailing is amazing! I’m already hooked, and want to come back as a volunteer.  We’ve just caught a Mackerel and it just landed on my feet!!”

Lauren, 16, from Kent and treated at UCLH is sailing on board Outreach and said, “I flew a kite for the first time ever last night, it went up so high, and I crashed it twice but it was really funny.  I’ve been sailing the boat but when we had the motor on and when the waves crashed against the side it knocked the boat the other way!  I’ve been everywhere on the boat, sitting at the front and on the side.  This morning we went to the big orange lifeboat, which was really interesting and I had a good night last night when the other girls came over and we played Uno.”

Becky, 16 from Surrey and treated at the Royal Marsden, also on board Outreach said, “It’s been really exciting, and I got married! Apparently it’s the first Trust wedding and we had Haribo rings.  We had our honeymoon just now right at the front of the boat chatting.  I have sailed the boat but apparently I’m not that good at straight lines!  We’ve been swimming and I really liked that.  Mark our skipper filled up all our water pistols yesterday for the water fight, and we got the other boat when we went past, they got us too and I was soaked. “

The group will have the customary BBQ tonight, and because the weather has improved, for the first time this year the barbeque will be at Newtown Creek.