It's not over yet: sailing in October

The summer sailing season may be over, but with the ASTO Small Ships race and two canal trips still to come, everything is still in full swing at the Ellen MacArthur Cancer Trust.

This weekend sees the annual ASTO Small Ships race return to Cowes.  It is an inclusive race for those learning to sail and people with disabilities, giving young people the chance to take part in an exciting event on the Solent: a perfect opportunity to help rebuild confidence after cancer.

Organised in partnership with the Royal London Yacht Club and supported by organisations on the Isle of Wight, the ASTO Small Ships race takes place annually on the first Saturday of October. Each year, it marks the end of the Sail Training season, with 23 vessels taking part in 2018.

In the past, graduate volunteers have represented the Trust as Solent Hero's crew for the Small Ships race. This year, it is the turn of young people on return to sail to race around on the water. They will be aboard one of around 25 boats competing for a number of prizes.

During the race-day parade, crews get to show off their fancy dress, the theme of which for 2019 is 'under the sea'. Keep an eye out for the Trust's bloom of jellyfish!

Rounding off the day will be a prize giving ceremony as well as a disco, giving all the young people who took part the chance to make friends and celebrate their achievements. We can't wait! 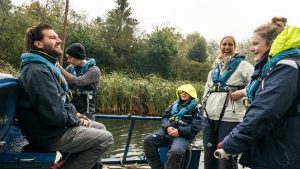 The latter half of October sees two widening access canal trips, a tranquil sailing experience for young people with more severe mobility issues or who are still working up to spending a week on a yacht. These trips provide more one-to-one support, while still offering young people the chance to be around others who have been through the same thing they have.

Whether it is assisting with opening locks and helming, or it is the sense of independence from being away from home, cruising on a canal brings with it so many opportunities to find your footing during recovery.