Happy International Day of Friendship from all of us at the Trust! 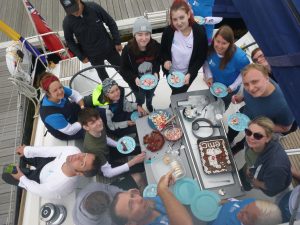 On this International Day of Friendship, we’re celebrating the long-lasting relationships made on Trust trips.

More than 95% of young people who have sailed with us say they gained friendships from their time with the Trust.

The Unspoken project shows how being around those who have been through similar experiences provides a connection without even having to say anything.

Volunteer Bill Brown put it best in his article for The National: “I realised that sailing is only the means used to achieve significant changes in the lives of the young people who come on trips. It is the conversations on the trip and the activities which bring them together that have a significant impact on helping them to start rebuilding their confidence.”

Whether it’s taking part in baking competitions, soaking each other in water fights at sea, or sitting around a table talking about their time with cancer, it is the friendships that last long after trips end.

In the latest issue of Inspire, the story of Tom and Ted shows how meaningful making friends on trips is.

Both boys were 11 at the time of their trip, nervous to arrive but hopeful about what the experience would bring. 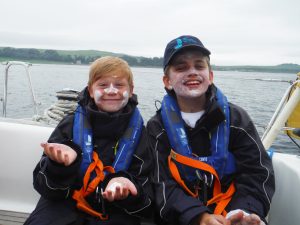 “I felt different afterwards because I’d met Ted,” said Tom. “Ted was just easy to talk to. He was kind and understanding and I felt I could always talk to him.”

Ted agreed: “Tom is definitely my kind of person because he is calm, kind and good to have around, because I get stressed with people who are too loud and silly. He didn’t make me feel left out or that he was better than me. We were the same.”

Of his trip, Tom said: “I made new friends, it helped me gain confidence and to be able to talk more openly about my condition.”

The understanding between people on trips is what kickstarted friendships for Tallulah too.

She struggled to make friends during treatment because there was no one her age going through the same thing. But during her time with the Trust, she finally met other young people who understood how she was feeling, and those relationships have lasted ever since.

“The friendships I’ve made with the Trust are different to any other friendships I’ve had outside of the Trust,” she said. “We all understand what each other has been through and it doesn’t feel like you need to explain yourself. 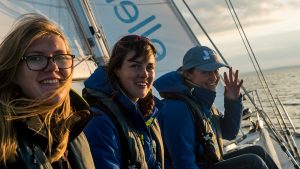 “As we don’t all live near each other, we don’t get to meet up often but we message lots and when we do see each other we just start where we left off – it never feels like it’s been so long.

“Earlier this year I went to the Isle of Wight Festival with two friends from the Trust – Louise and Holly – and we try to meet up as much as possible. Having these friendships has helped me so much, just having friends who know what you’ve been through and who are there to help and chat, even if it is over the phone.”

There are still spaces available on a trip for over 18s at the end of summer (9th-12th September) in Largs. If you, or someone you know, would benefit by sailing with us, follow this link for a referral form.

From all of us here at the Ellen MacArthur Cancer Trust – happy International Day of Friendship to you!