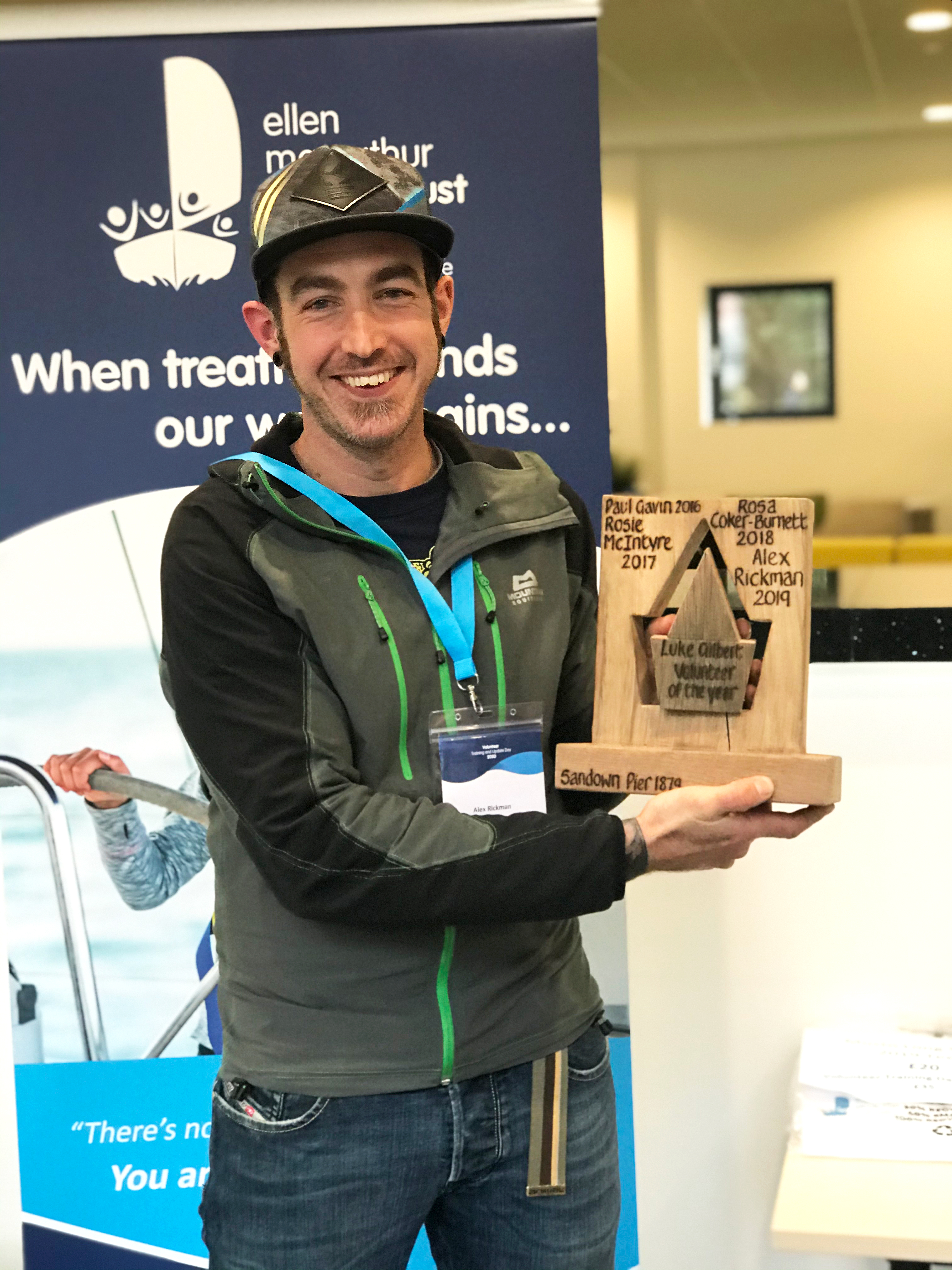 "He is always an absolute a ray of sunshine, oozes happiness and energy and projects positivity onto everyone around him” – this is just one of the glowing testimonials which has seen Alex Rickman named the Ellen MacArthur Cancer Trust’s 2019 Volunteer of the Year.

Alex was presented with the Trust’s Luke Gilbert Volunteer of the Year Award in recognition of the difference the 37-year-old has made to so many young people in recovery from cancer at the Trust’s annual Volunteer Day in Birmingham on Saturday (7 March).

This will be the third year Alex, a self-employed gardener and groundsman, has volunteered with the Trust. A keen sailor since he was 16, he has a history of working with young people through Cubs, Scouts, and the Duke of Edinburgh Award. Alex also had treatment for cancer himself, having been diagnosed with testicular cancer in November 2012.

A friend’s daughter, Vanessa ‘Nessie’ Hutchison who sailed with the Trust while in recovery, told him his sailing skills, his experience with young people, and the fact he had also recovered from cancer meant he should volunteer.

Alex admits he was ‘overwhelmed’ by his success. He said: “It’s sinking in. I was completely shocked and couldn’t actually stand up. I really have found my tribe with the Trust, I can just be me, and if that works then it’s brilliant, it’s fantastic. I can’t put it into words.

“There’s so many amazing volunteers. Everyone brings something special to the plate and to be nominated is overwhelming, to win is just phenomenal in a room full of amazing people.”

Alex was diagnosed with nonseminomatous testicular cancer after discovering a pea-sized lump on one of his testicles. He went to the GP the following day, who monitored him. Within a fortnight the lump had grown to the size of a golf ball. He recovered following chemotherapy, but it took nearly a year to be able to do a full week’s work due to fatigue.

As well as supporting young people on trips, Alex has thrown himself into fundraising with both feet. Last year he participated in the Great South Run and will run the 66-mile circumference of the Isle of Wight in May.

He added: “Volunteering with the Trust has honestly been the best thing that I have ever done. It brings together so many aspects of my life in one place. It focuses on helping young people, and seeing them grow in confidence is incredible.

“I never went into volunteering to get something out of it for me, but I and others around me have seen the difference it has made. “

The Luke Gilbert Volunteer of the Year Award was introduced in 2017 in celebration of the Trust’s legendary volunteer. Luke’s incredible personality, sense of humour, enthusiasm, compassion and huge amount of fun made him an inspiration to everyone he met. The annual award winners will have demonstrated all the qualities Luke embodied.

Alex was nominated by young people, other volunteers, and Trust staff and was presented with the award by Luke’s mum, Julie. Donations can be made to his Isle of Wight fundraising effort on his JustGiving page.