A slow but successful Round the Island Race

Over 1200 boats set sail yesterday in the iconic Round the Island Race, four of those boats were filled with 25 young people sailing with the Trust.  This was not a first-time trip but part of our return to sail programme, which seeks to ensure a long-term support system for the young people we work with.

The young people came from locations all over the UK, to take on the 55-mile race around the Isle of Wight.  Trust founding Patron Ellen MacArthur and record-breaking sailor Brian Thompson were also onboard for the day to share their knowledge with the young people.

It was a slow start for the fleet, the Trust boats crossed the line off the Royal Yacht Squadron at 0710 as the boats bobbed along taking four hours to reach the Needles. Shortly after the Needles the crew onboard Shabeene and Wight Orca made the call to retire and headed back to Cowes.  The rest of the fleet carried on in some of the lightest conditions for the last few years, whilst records were broken last year, 2018 was more of a very light cruise.  After 13 long hours at sea, the Waita and Omerta crossed the finish line and came home to a much-deserved dinner of fish and chips.

Jessica from Cambridge enjoyed her first Round the Island race as she said; “The energy of taking part in Round the Island Race was very exciting, sailing alongside hundreds of other boats was really good, I’ve made lots of new friends who have all experienced similar situations to me I definitely feel a lot more confident now”

Whilst the Trust boats took on the race course on the water, we would like to say a huge thanks to the amazing fundraising efforts by the 55 runners and 111 cyclists from JPMorgan’s Bournemouth and London office who took on their own land base race to raise money for us to reach even more young people in recovery from cancer.

As always the amazing work this weekend could not happen without the fantastic support of the volunteers, and business that support us, big thanks to Robbie of Team Spy Velo for his help with the road signs for our cycling event, Fire Safety Training for lending us safety equipment for the weekend and Cowes Harbour Storage for allowing our fundraising cyclists to keep their bikes safe over the weekend and our friends at Sportography.tv for capturing this awesome picture! 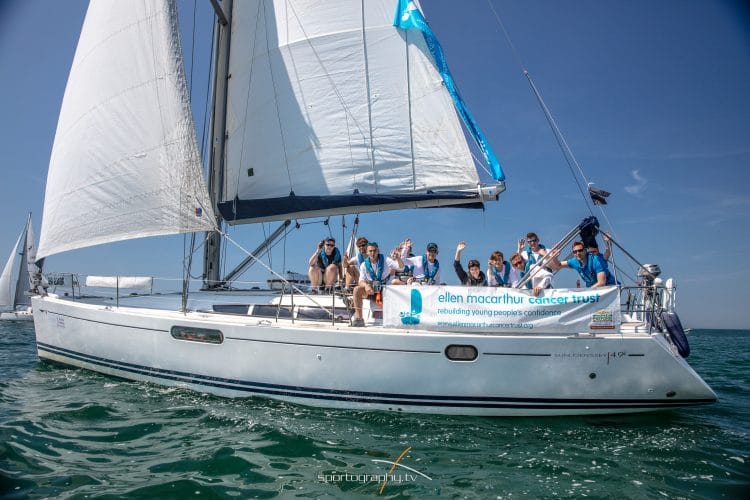